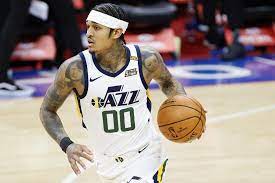 When you think about the NBA stars players like LeBron James, Steph Curry and Giannis Antetokounmpo might rank highly in your thoughts.

There are plenty of top drawer players who fly under the radar though. Here we look at the most underrated players in the NBA right now.

Kicking off our list of the most underrated players in the NBA right now is Nikola Vucevic. He has posted steadily improving numbers since becoming the 11th overall pick back in 2011 and, for our money, has never truly had the plaudits he’s deserved.

He’d performed admirably for Orlando Magic and has continued to post good numbers since joining the Chicago Bulls.

This season he put up 24.6 points, 11.8 rebounds and 3.8 assists per game. Admittedly, he could be strongerdefensively, but he is one of the better big men in the offensive phase of the game; in fact, you might suggest he’d been carrying the Magic in that offense for a few years.

Chris Paul is basically the only reason that the Phoenix Suns made the postseason. They were looking like a lottery team a year ago and yet they are the number two seed in the loaded Western Conference.

His impact and leadership are second to none as he does more than what the stat sheet tells you. His game averages of 15.9 points, 4.8 rebounds and 8.8 assists are decent but it’s the fact he’s elevated the play of almost every player around him that really impresses.

Most people thought Paul was just coasting towards his retirement, boy, has he proved them wrong; you just wonder when he’ll get the credit he deserves.

For some reason, people don’t talk about the impact Malcom Brogdon has on the Indiana Pacers – at least not often enough. Some might justify that by pointing out that they missed out on a place in the postseason but it’s a big ask for one man to make a team. Brogdon tried his best though; proof of that can be found in his stats – 21.6 points, 4.7 rebounds and 6.1 assists per match. That’s his technical talent taken care of, the other factor we need to mention is how much of a good leader he is. So, yes, the Pacers might have had a disappointing campaign but no blame lays at Brogdon’s door.

Let’s get one thing straight, it’s hard to stand out against a player as good as Steph Curry especially when he’s had a season that has seen him etched into the history books as one of the best three point shooters in NBA history.

It doesn’t mean Wiggins deserves to be dressed up as nothing but a sidekick though; plenty has been made of the Golden State Warriors being a one man team but Wiggins’ 17.8 points, 4.7 rebounds and 2.1 assists prove that’s not really the case.

Topping our list of the most underrated players in the NBA is Jordan Clarkson. To be fair, he did just win the NBA Sixth Man of the Year award but, even so, we still believe he is deserving of much more praise. After coming off the bench for the team with the best record in the league, he averaged 18.4 points, 4.0 rebounds and 2.5 assists per game.

Not only does this mean he’s posteda career high in points and reboundsbut he is also shooting a rather impressive 89.6% from the free throw mark. Clarkson is one of the few players in the association that can come off the bench and instantly provide you with 15 plus points and he isn’t talked about enough; after all, he and his Jazz teammates could lift the NBA Championship soon.

There you have it, the most underrated players in the NBA right now. If you want a more complete list, check out TwinSpires complete article: edge.twinspires.com/nba/the-nbas-most-underrated-players/