Tina Arning is an American actress, writer, and producer who is best known for her roles as Angelina on Everybody Loves Raymond, Tiffany on Weapons of Mass Distraction, Sasha Green on The Young and The Restless, and Tanya on Modern Family.

She has starred in Spy Hard, alongside Leslie Nielsen and Nicolette Sheridan, who now plays Edie Britt in Desperate Housewives. Also, Tina has written and produced the short film titled 40-Something…and Single.

Born on October 27th, 1968 in Greenwich, Connecticut, Tina Arning is 52 years old. She is currently residing in Los Angeles, California.

Tina attended Greenwich High School in her hometown, and later she attended Boston University to attain her Bachelor’s Degree in Mass communications at the age of 21.

There’s no information about Tina Arning’s parents or siblings but they must have been very supportive of her career.

Tina Arning has started her career in acting by playing the character of Sasha Green in The Young and The restless. The year 1995 was productive for Tina as she appeared in numerous TV shows like A Dangerous Affair, Misery Loves Company, Ned and Stacey, NewsRadio, and Night Stand. In 1996, she appeared A Angelina in Everybody Loves Raymond.

She also portrayed the role of a dancer in the movie Spy Hard. She appeared as Tiffany in Weapons of Mass Distraction in 1997. in 1998, she appeared in Two Guys, a Girl and a Pizza Place and Two of a Kind. From 2000 to 2019, Tina has appeared in numerous projects including Resurrection Blvd, Tacoma FD, Rattlesnakes, Stumptown, The Morning After, Modern Family, Uh Oh!, So Little Time.

After ten years of break from the television and movie industry to raise her kids, Tina returned as a guest star for an episode of Modern Family season 7. She portrayed the character of Tanya, a trophy wife of Claire’s colleague. In 1990, Tina was awarded the Indy Award for Best Actress for her role as Maggie The Cat in the drama Cat On A Hot Tin Toof.

Those who know Tina for her acting career, sure want to get a bit more familiar with Tina’s personal life. And many of you may be wondering about Tina’s conjugal life. Is Tina Arning Married? Who is Tina Arning’s husband might be some of the questions that you seek an answer to.

Well, Tina Arning isn’t a married woman now. However, she was married to her husband Jason Aaron Brazell a couple of years before. Tina’s then-husband, Jason is an internet entrepreneur.

The two were married for a couple of years and share 3 children together. But eventually, in their marriage, things started to go south. Following that Tina filed for divorce from her husband in Los Angeles County Superior Courts in Los Angeles California on the 25th of May, 2016. 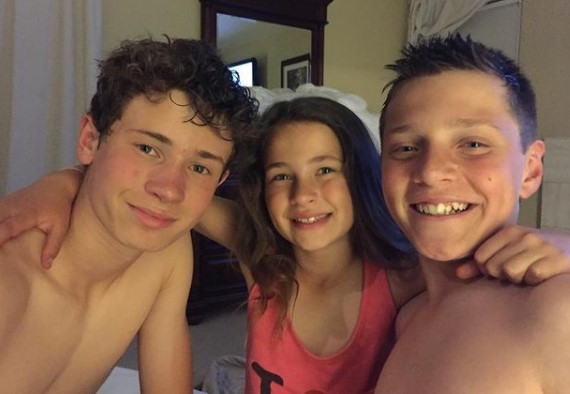 Now, Tina is leading the life of a single parent raising two sons and a daughter by herself. Arning has not married again and her social media posts also hint that she is not dating anyone right now. She is focusing mainly on her career and her motherhood.

Tina started her acting career early and after more than 30 years of professional career, she has turned into a writer and producer. Though Arning has not been able to grab the lead roles in TV shows and movies, her acting career has paid her well.

Also, Tina’s Instagram posts show how she loves to travel and take a vacation in various destinations with her kids. So, meanwhile, Tina Arning’s net worth is estimated to be 1.5 million dollars as of 2021.

The 52-year beauty stands at a height of 5ft 6 inches and weighs 57 kgs. She has dark hair and blue eyes. She has maintained herself with regular exercise and diet. No doubt, she still is a tough competition for newbies in the entertainment industry.

Tina has shown her presence on Twitter as @TinaArning since June 2007 and has 318 followers. Not much, she has tweeted about the health measures that one should take in the midst of a pandemic. She has also remembered her coworkers from Everybody Loves Raymond.

Tina is active on Instagram as tinaarning where she shares her personal pictures alongside her children vacationing in various destinations. She has to date 555 followers.

On Facebook, Tina Arning is liked by 1,226 people and followed by 1,215 people. She keeps on updating her profile pictures and posts storied regarding her appearances on TV shows.

Moreover, Tina started her own YouTube channel as Tina A with 13 subscribers on Sep 12, 2011. she has posted the trailer of the 40 Something…and Single: A Very Short Film written and produced by herself which has received 1k views.