In the world of professional golf, one player who has dominated the stage for most of his career is Tiger Woods. Proof of that is in the championships he has won, the accolades he has received and in the records that he holds.

Youngest man and first African American to win the U.S. Masters, that too with a record score,  tied in first place for PGA Tour Wins, a #2 ranking in men’s major championship wins, 106 wins worldwide and a staggering 15 majors, the Presidential Medal for Freedom, the list is endless.

Tiger Woods is golfing legend. And he is also human. There have been huge successes, and a few staggering setbacks. And yet each time, he has found his way back to the top, tenaciously. Like champions do. 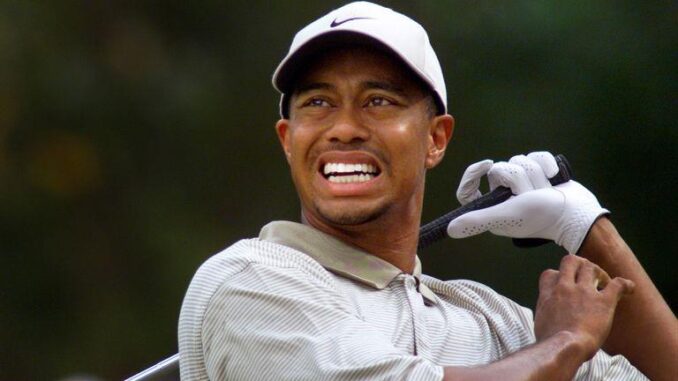 Tiger Woods was born Eldrick Tont Woods on 30th December, 1975, in Cypress, California. His father, Earl Woods was a former US Army officer and a Vietnam War Veteran and his mother Kultida ‘Tida’ Woods, is from Thailand, which is where his father met her in 1968, during a tour of duty.

His is an ever-unfolding story, and it all starts with his name. His mother chose his name ‘Eldrick; the starting E and the ending K being the first letter of his father’s and mother’s name respectively. The middle name ‘Tont’ is a traditional Thai name. Tiger’ was the nickname of his father’s South Vietnamese friend, Col. Vuong Dang Phong, and Eldrick was given that name in his honor.

Orange County, California was where the young Woods grew up. Introduced to golf even before he was 2 years old, he was considered a child prodigy early on. His father’s military background gave him the opportunity to play at the Navy golf course by the Joint Forces Training Base in Los Alamitos.

Golf was his destiny and future, and he took to it like a fish to water. At the age of 3, he putted against Bob Hope, the comedian, for the Mike Douglas Show. At that tender age, he had the distinction of shooting a 48 over nine holes at the Navy golf course and by the age of 5, he was already in Golf Digest and also on That’s Incredible on ABC.

He became the youngest amateur champion at the age of 15, and went on to win it for the next 2 years as well. He is in fact the only player to have won it thrice. He participated in the first of many PGA Tour events in 1992; the tournament in question was the Nissan Los Angeles Open. That same year, he was named Golf Digest Amateur Player of the Year and Golfweek National Amateur of the Year.

Woods enrolled in 1994 fall in Stanford University through a golf scholarship and justified his inclusion by winning the 40th Annual William H Tucker Invitational that same year in September. He was just 19 when he participated in his first PGA Tour Major event, the 1995 Masters, and then turned pro in 1996.

He won his first major event, the Masters, on 13thApril, 1997. He was just 21 when he achieved this feat, and also the first African American to achieve this feat. By then he had already been honored with the title of Sportsman of the Year and PGA Tour Rookie of the Year the previous year, 1996. And by the end of 1997 he had taken home wins in 3 more PGA Tour events.

Tiger Woods has been a colossus in the golf course. He landed the #1 spot in the golf rankings in June 1997, and it was not even a year since he had turned pro! He continued to dominate the game right through the first decade of the New Millennium.

He was the #1 ranking golfer for 264 consecutive weeks, from August 1999 to September 2004! And if that was not enough he hit that ranking again in June 2005 and retained it till October 2010, a staggering 281 week! And just to underscore how dominant he was, here is another little statistic – during this same period he won 13 major golfing championships as well.

The Tiger Beyond the Golf

Here are a couple of things beyond golf about Tiger Woods that you may not have known about. First, he is also the CEO of TGR, an umbrella organization that has a number of other companies and philanthropic avenues that he runs, including:

He is also an avid blackjack player. Don’t believe it? Ask Phil Helmuth and this is what he has to say, “Tiger is excellent at blackjack. He bears down a little bit, pays attention, and plays perfect basic strategy. He takes his losing hands well and doesn’t get upset, though you do see that extra bit of focus at times. I remember having a 13 against the dealer’s 2 and not being sure what to do. Tiger immediately told me to stand—and he was right. It’s the correct play. I said, “Aren’t you supposed to be a dumb golfer?”

“He cracked up. I remember that Tiger won big that night. I’m not going into the number. But if I say big, of course it was six figures.”

He is in fact an accomplished player who has been featured by the Las Vegas Review Journal. No doubt he began his journey playing blackjack games for free, but is now a serious high roller.

Injury is a part of every sportsperson’s life, and it didn’t spare Tiger Woods either. In June 2008 after winning his third US Open championship through a sudden death duel with Rocco Mediate, he skipped the rest of the season for further reconstructive surgery on his left knee – he had already undergone a procedure in April of that year – and recuperation from a double stress fracture in the left tibia.

Woods came back from injury and was able to retain his World #1 ranking despite not having the best of finishes in the tournaments he was participating in at that time. That year was the first time he ended without a single major win since 2004.

There was trouble brewing on the personal front as well. He was facing separation from his wife owing to reports of infidelity and ‘transgressions’, and quite a few of them, apparently. In December 2009 he took a break from the game to tend to his family matters.

In April 2010, Woods made a return to golf, competing in the Augusta Masters in Georgia and finishing fourth. He also finished tied fourth at the US Open that same year. In the meantime his divorce went through, with a settlement rumored to be around $750 million.

Like all great men, Tiger Woods managed to put his woes behind him and,in March 2012, won the Arnold Palmer Invitational. He also won the AT&T National event that year to cross the hallowed Win #74 that Jack Nicklaus held.

In June 2017 he checked into a program to deal with issues arising from use of pain medication and also a sleep disorder. He got back to the game around November and finished a tied second at the Valspar Championship in 2018. He continued to take significant strides forward and, on April 14th, 2019, he won the Masters, his first Major win in 11 years. He received the Presidential Medal for Freedom on May 6, 2019, from President Donald Trump.

And the story doesn’t end there; he went on to win his 82nd career PGA title, tying for first place with Sam Snead.

On 23rdFebruary, 2021, he was involved in a rollover car accident in Rancho Palos Verdes, California. The accident was serious and fortunately there were no life-threatening injuries. No charges were filed, and he was treated for injuries that included multiple fractures of the leg.

The following is a concise career summary of the golfing legend that is Tiger Woods.